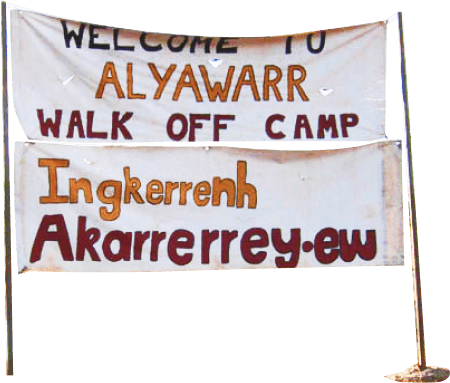 Sixty years after the first walk off, Banjo was involved in another one. 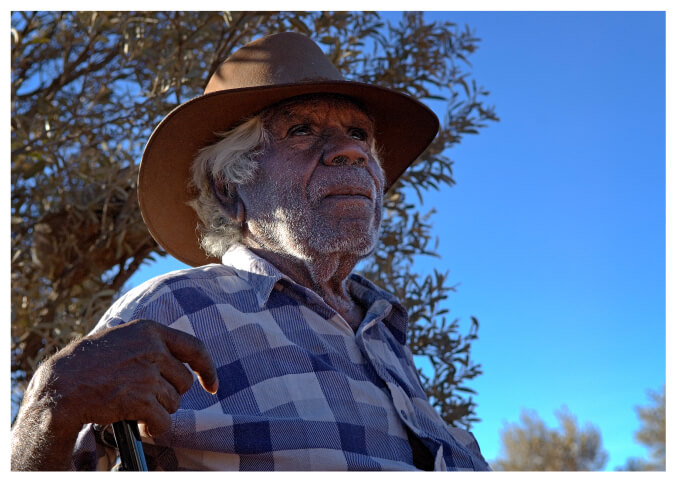 In 2009, Banjo Morton led a walk off from Ampilatwatja in response to the Northern Territory Emergency Response (NTER).
NTER became known as The Intervention.

Banjo and his nephew, Richard Downs, worked with the family and the community to set up the 'Walk Off Camp' at Honeymoon Bore on land that was returned to them in 1976.

Honeymoon Bore (“Arwerreng”) is located about 3 km outside of the government prescribed community boundary of Ampilatwatja.

What was The Intervention?
The Northern Territory Emergency Response (NTER) was a set of policies introduced by the Howard government in 2007.

It was a response to the The Little Children are Sacred report, which claimed that neglect and sexual abuse of children in Indigenous communities had reached crisis levels. 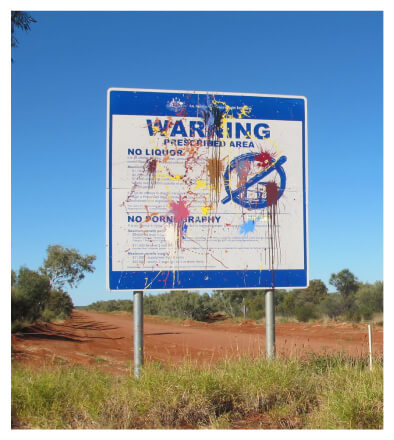 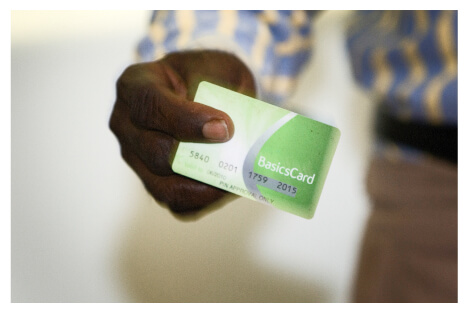 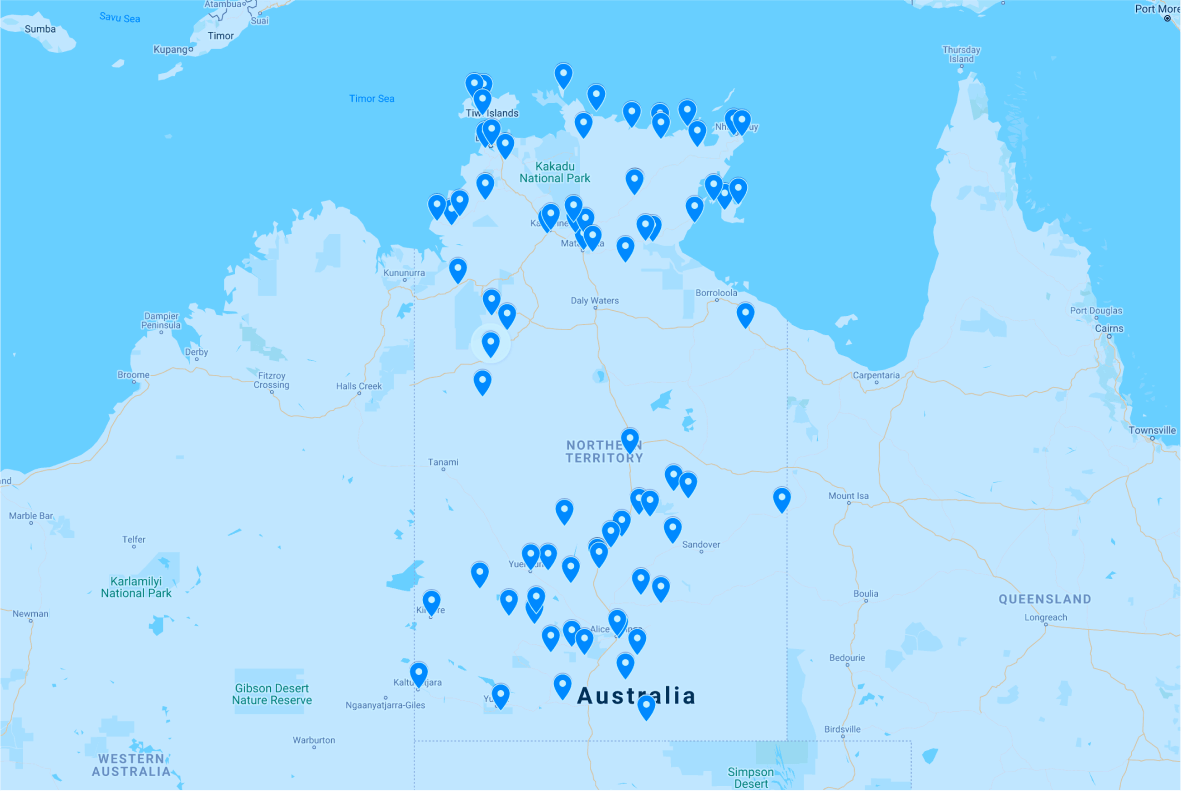 Approximately 45,500 indigenous people are living under the Intervention’s policies. More than sixty-five communities in the Northern Territory are affected.
In 2012, the Gillard Government extended The Intervention until 2022.
Banjo and The Intervention

We feel like we’re all yarded up like a mob of bullock within the boundaries of that lease.
Banjo Morton
Banjo Morton
Banjo and others from the community walked away from Ampilatwatja and went to camp at Honeymoon Bore, outside the government’s prescribed area. 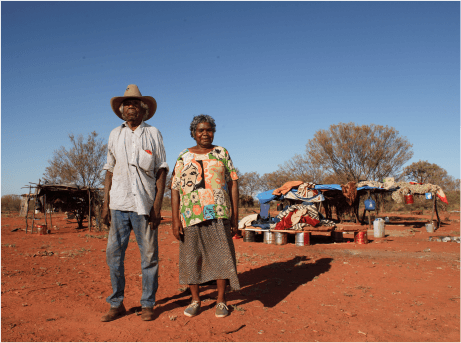 Banjo and Lily Morton at Honeymoon Bore Arwerreng).
[ X ] Close
Honeymoon Bore is highly significant to the community. In 1976, this small plot of land about 10km from Ammaroo Station, was granted to Alyawarra families under the Land Rights Act.
The Protest House

On February 14, 2010 Banjo and the community from Ampilatwatja held the official opening of Protest House out at Honeymoon Bore.

Protest House was constructed in the Walk Off Camp at Honeymoon Bore with the assistance of a number of individuals around the country as well as a number of union groups. The Walk Off coincided with national demonstrations against the harsh control measures imposed by the Intervention. 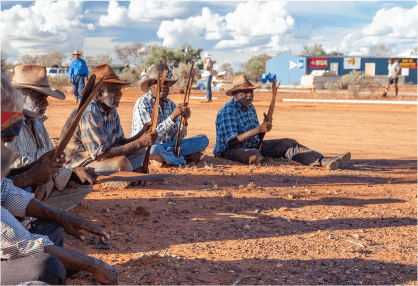 Banjo Morton with senior men from Ampilatwatja Kingy Ross and Frank Holmes and another man from Ali Carung perform a traditional song at the Protest House opening ceremony.
[ X ] Close 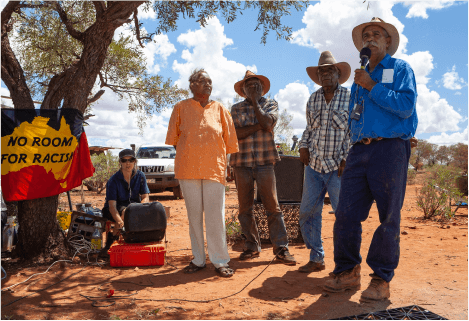 Introduction speech at the opening of Protest House 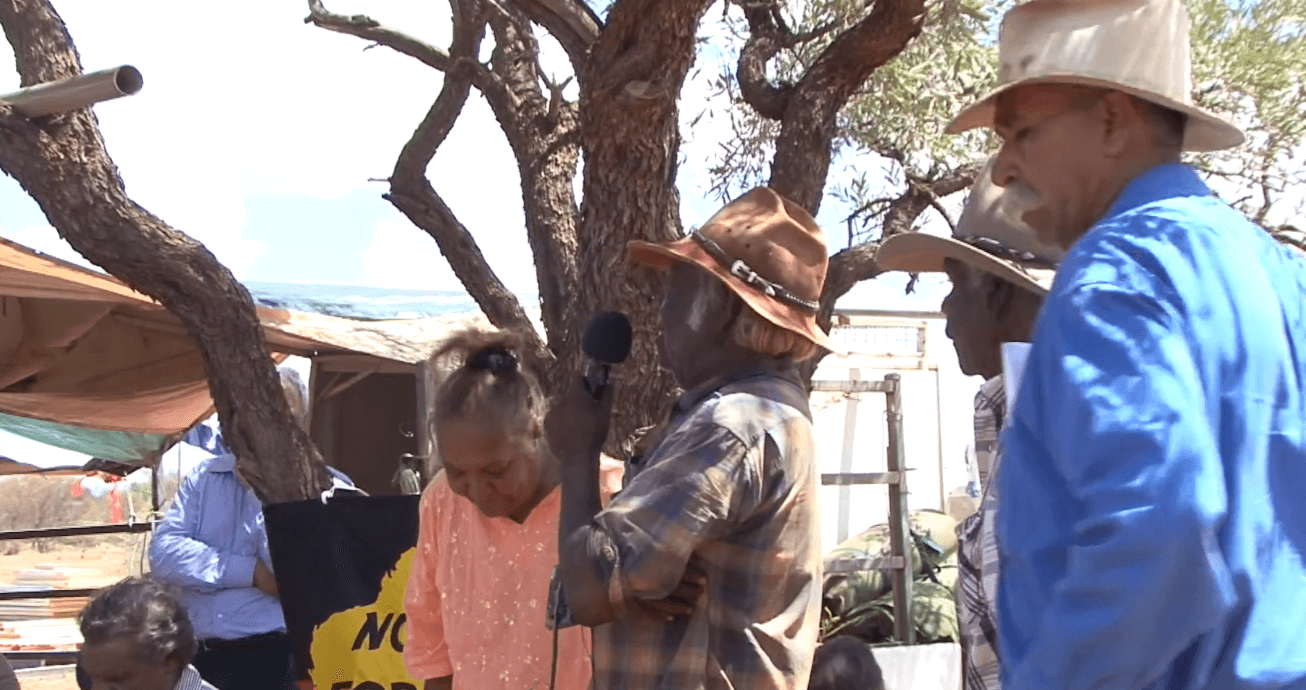 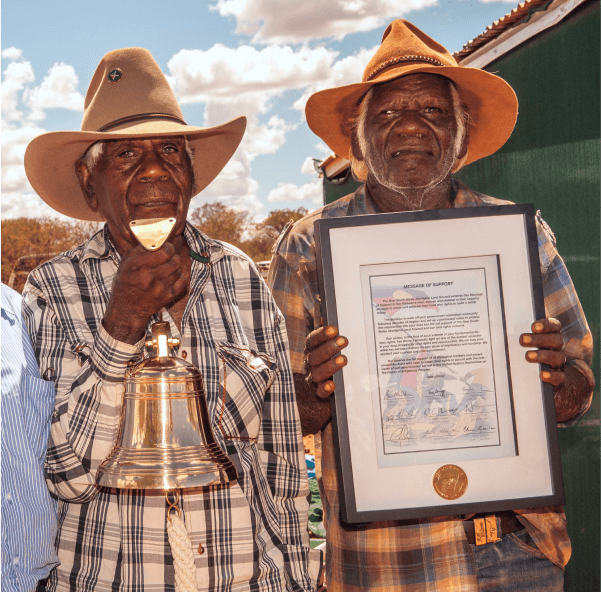 At the opening, Frank Holmes and Banjo Morton were presented with a large brass bell by Geoff Scott, CEO of the NSW Aboriginal Land Council.

The inscription on the bell reads:
‍
This Declaration Bell is presented to the Elders and families of the Alyawarra Nation by the New South Wales Aboriginal Land Council on February 14, 2010 in recognition of their principled walk-off and continuing fight to uphold their land rights, culture and heritage. May it ring for justice and change.

Geoff Scott, CEO of the NSW Aboriginal Land Council, made a gift to the Alyawarra people that was both symbolic and ironic and will ring a loud and clear rallying call to the Alyawarra people who just a few months ago walked off the literal cesspit that the Ampilatwatja township had become after years of neglect from all levels of Government. 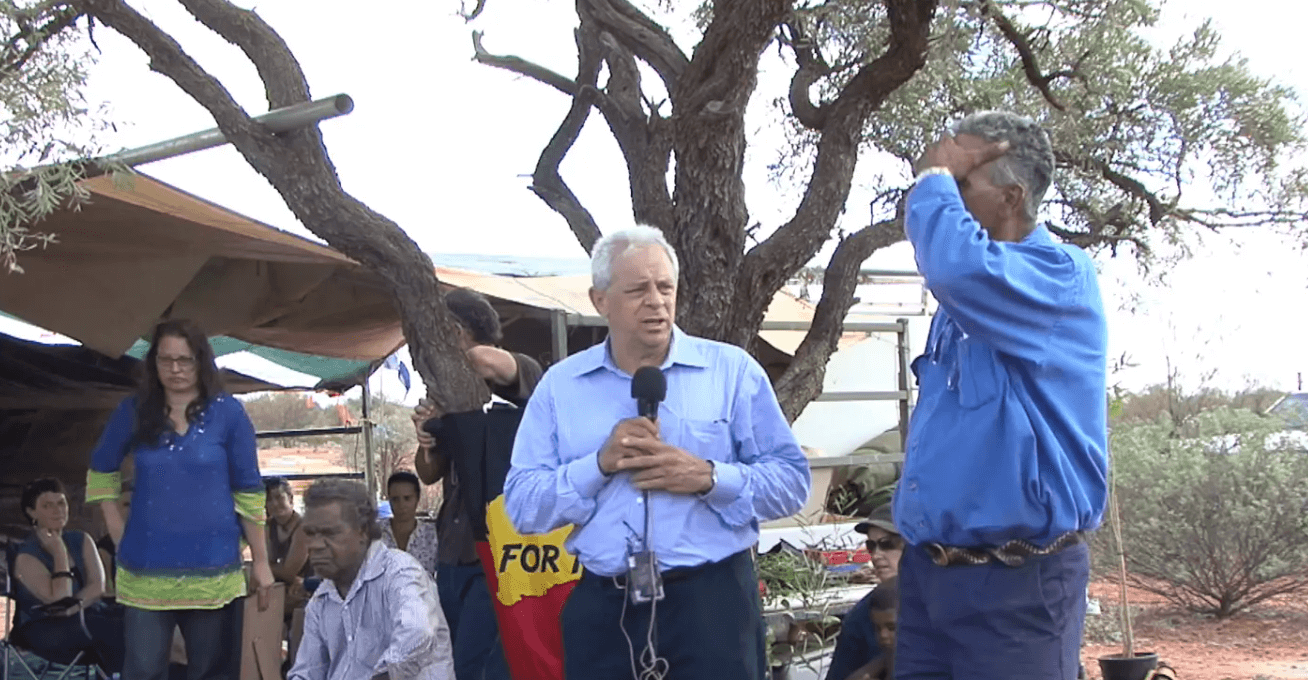 The Intervention has had consequences that will have repercussions for generations. 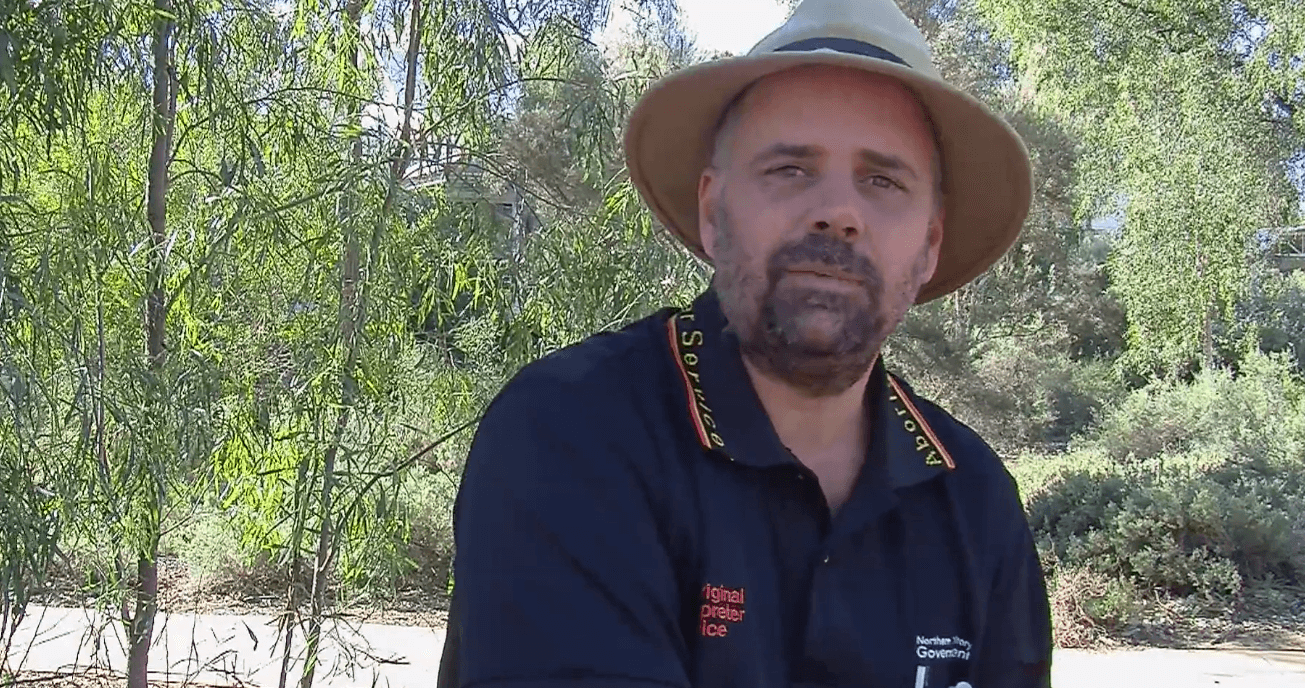 The Intervention is one of the worst policies inflicted on Aboriginal people in my lifetime.

The community has not been involved in any discussions.
‍
The community’s housing is substandard – some of the houses are just tin sheds – and the sewerage system is more than 25 years old. The local Council, led by Banjo Morton, has been disbanded and a Government Business Manager installed.
To June 2009, there was no sewerage truck and sewage started overflowing.
‍
The community has felt shamed and humiliated by the policy of welfare quarantining. Contrary to common assumptions of ‘welfare dependency’, the Alyawarra Elders worked all their lives as drovers, stock hands and domestic labourers, and are now aged pensioners.
‍
Banjo Morton, interviewed in the Sydney Morning Herald, February 13, 2010, said the only benefit Ampilatwatja had received from the $1.5 billion intervention is the building of a BMX bicycle track, which is now eroded and unsafe to use and which most residents did not want.
‍
Bicycles remain locked in a container. 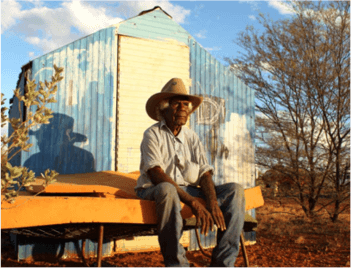 We wanted grass for the football oval…(but) they shut us out… they didn't ask us what we wanted.

The Federal Government compulsorily acquired the Ampilatwatja Community and installed a Government Business Manager (GBM) to manage the community.

Alyawarra welfare recipients have their income ‘quarantined’, forced to use a ‘BasicsCard’ to get supplies (not unlike when indigenous people were ‘paid’ by their employer in flour and sugar, rations, instead of wages).

There is a forced takeover of the Ampilatwatja Community Store, removing it from community ownership and handing it to new administrators.

Community housing in such disrepair that sewage leaks over the floors and across the ground. The community’s requests for action are ignored.

Banjo Morton leads a Walk Off from the Ampilatwatja Community to Honeymoon Bore, an area outside the prescribed Federal Government leased area.

Letter from the Community, signed by Richard Downs and dozens of residents, sent to Federal Minister for Indigenous Affairs, Jenny Macklin, requesting a meeting.

Jenny Macklin does not meet with Community. Advises by letter that there will be no new housing at Ampilatwatja.

Richard Downs approaches UN rapporteur, James Anaya, to seek refugee status for the Alyawarr community saying they had become outcasts in their own country.

Geoff Scott, CEO of NSW Aboriginal Land Council, gave the Alyawarr people a large brass bell with an inscribed message in recognition for their continuing fight to uphold their land rights. 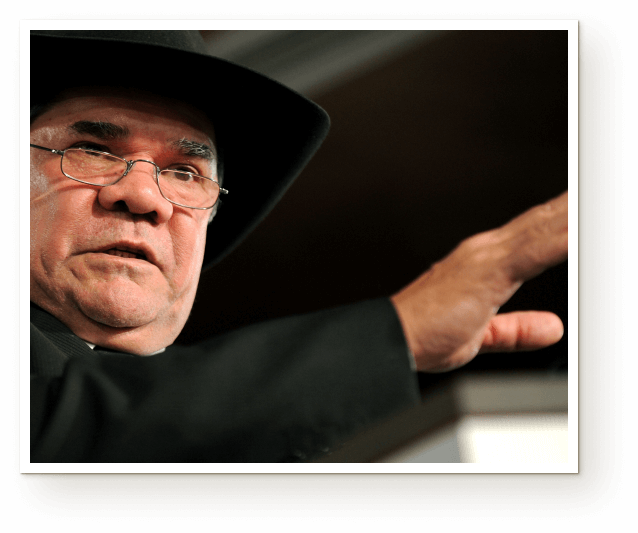 Mick Dodson, an Australian Aboriginal political activist, lawyer and scholar, was named the 2009 Australian of the Year in recognition of his work to help better the lives of the country’s indigenous peoples and to promote reconciliation between Australia’s indigenous and non-indigenous residents. 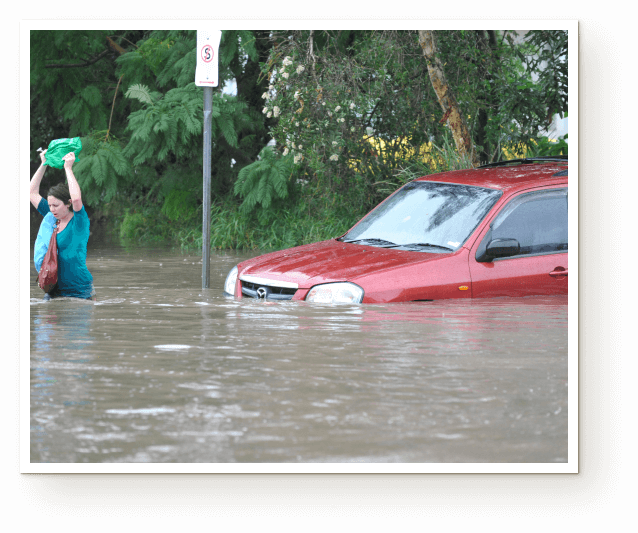 As a result of saturated land, already full rivers and a barrage of tropical cyclones, floods hit north Queensland in a disaster that put 62 per cent - or about one million square kilometres - of the state under water. Hundreds of thousands of cattle were lost, towns were cut off, and most of Queensland was declared eligible for disaster relief. 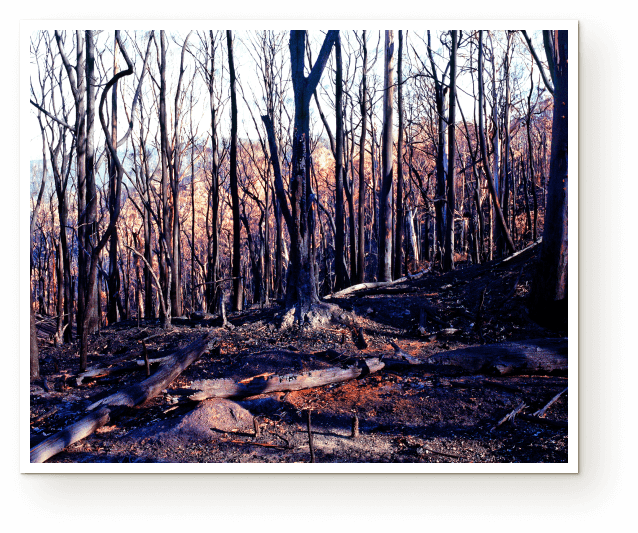 The 2009 Black Saturday bushfires in Victoria were the most devastating in Australian history. One hundred and seventy-three people tragically lost their lives, 414 were injured, more than a million wild and domesticated animals were lost and 450,000 hectares of land were burned. Some towns were virtually wiped out. 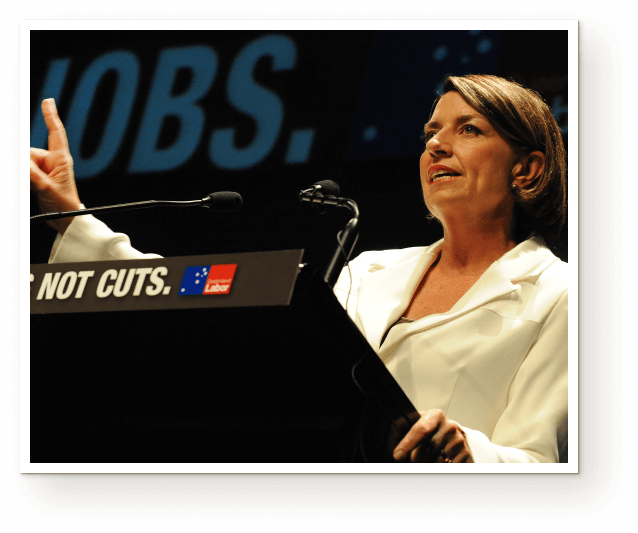 The Hon. Anna Bligh MP, Premier of Queensland, became the first woman in Australian history to be directly elected to the position of State Premier. Bligh had previously been appointed as Premier in 2007, and was then the first female to be Premier of Queensland. As her state was battered by floods and cyclones she famously said: “This weather may be breaking our hearts but it will not be breaking our will.” 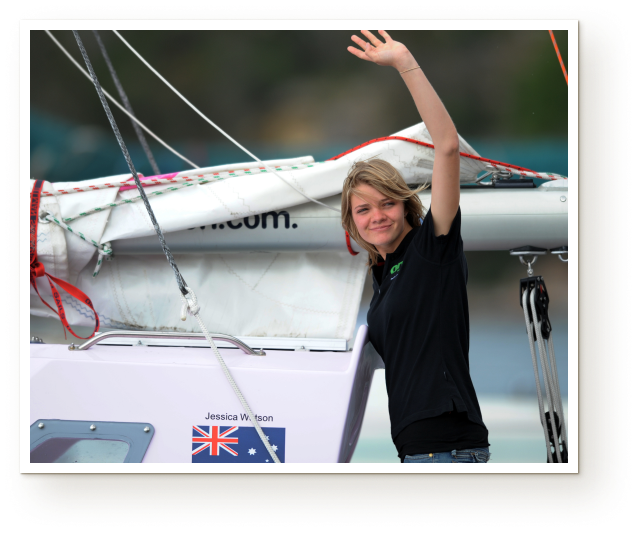 Jessica Watson sailed out of Sydney on October 18, 2009. On her return in May 2010 Watson became the youngest person to sail solo and unassisted around the world. Over 75,000 people turned out to welcome her home. Because of her age, there were many naysayers before Jessica left, but she persisted.

What was going on in the world? 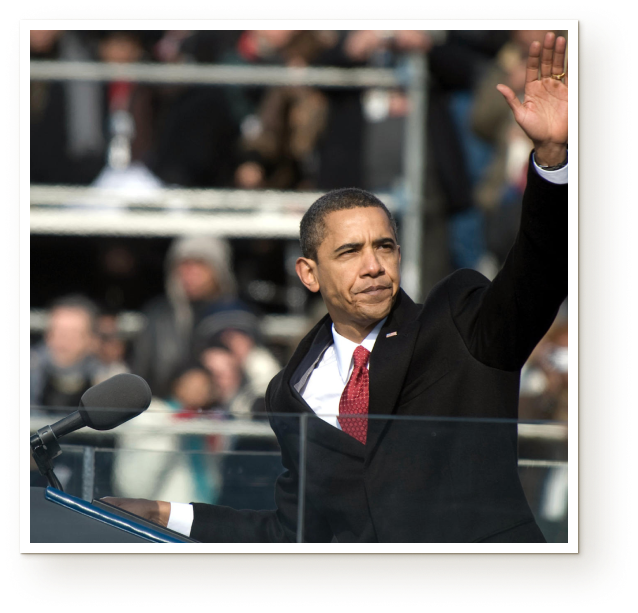 On January 20, 2009, Barack Obama (born August 4, 1961, Honolulu, Hawaii, U.S.) was inaugurated as 44th president of the United States (2009–17). He was the first African American to hold the office. Before winning the presidency, Obama represented Illinois in the U.S. Senate. In 2009, he was awarded the Nobel Peace Prize “for his extraordinary efforts to strengthen international diplomacy and cooperation between peoples.” Obama fought to secure free healthcare for all Americans. 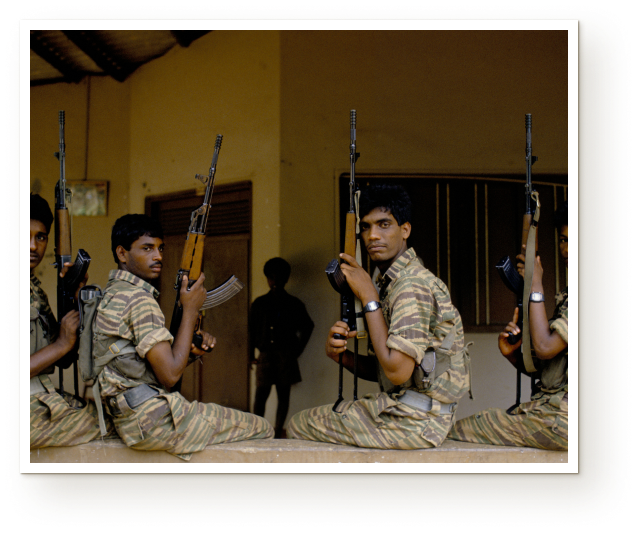 On May 18, 2009, Colombo declared the end of the 26 year civil war between the Sri Lankan government and the Liberation Tigers of Tamil Eelam (LTTE), also known as the Tamil Tigers. The war had begun after many marginalising efforts by the majority Sinhalese government reduced the living circumstances of the minority Tamils. Both sides committed terrible atrocities during the war. Tens of thousands of ‘disappeared’ Tamils are still missing. 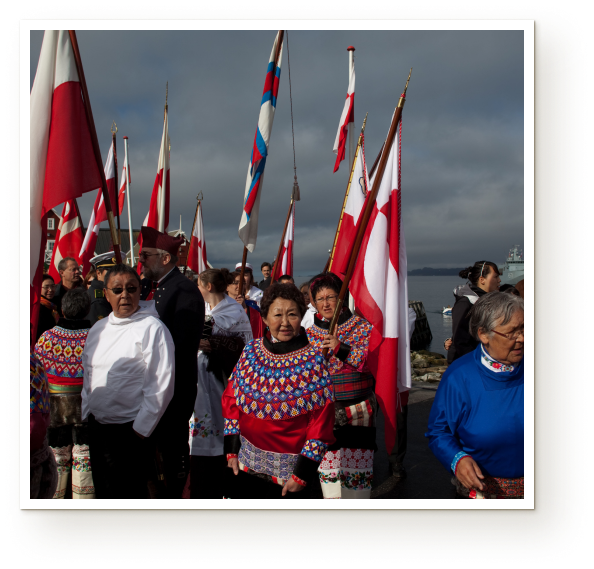 On its National Day, June 21, 2009, Greenland began a new era of self-rule after 300 years under Danish authority. The new status took effect six months after 75 per cent of voters approved a referendum to hand more power to the local government and take control of the island's vast natural resources. Kalaallisut, a traditional Inuit dialect, became the country’s official language, and Greenlanders were recognized under international law as a separate people from Danes. 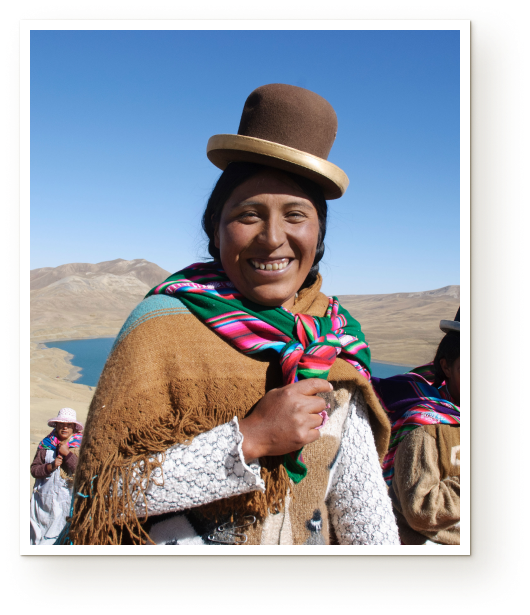 A new constitution was passed in Bolivia that included comprehensive rights for Bolivia's 36 indigenous communities. The constitution explicitly recognised their cultural identities and customs, as well as collective ownership of land, the granting of more regional and local autonomy and the right of indigenous groups to carry out community justice under their own legal system. It is seen by many experts as one of the most comprehensive constitutions for indigenous rights in the world. 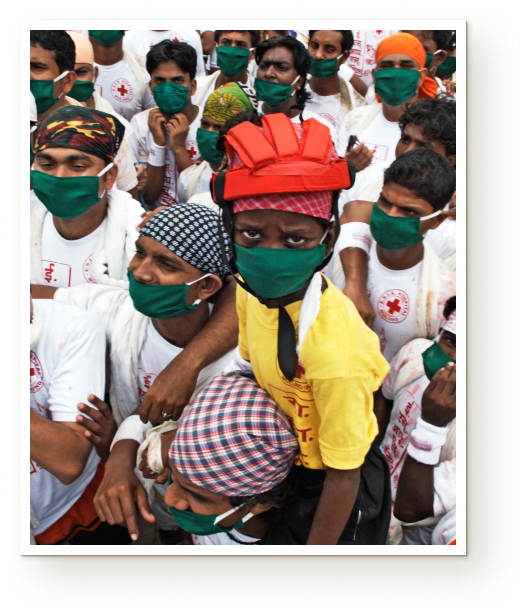 Swine Flu deemed to be a global pandemic

‘Swine Flu’ (H1N1), a particularly virulent form of influenza, began in Mexico in April 2009. Despite efforts to contain it in that country it quickly spread around the world. In June 2009, the World Health Organisation deemed it to be a global pandemic. Schools were closed, quarantine measures were imposed, and vaccinations occurred around the world. It is estimated that 11-21% of the global population contracted the illness, and between 203,000 and 579,000 people died from it. Numbers are unclear due to not all cases being reported.

What changed with The Intervention?
Life for indigenous communities changed significantly under legislation that was supported by both major political parties, Labor and Liberal.

The lack of consultation with indigenous communities was reminiscent of the mission days when non-indigenous managers had control of almost every aspect of the indigenous people’s lives.

Many Aboriginal parents were concerned that their children would be forcibly removed from communities, just as they were by previous governments. 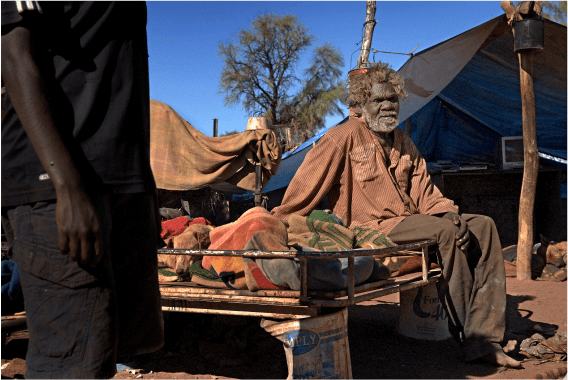 Some examples of things that changed:
1.
The government-funded Community Development Employment Projects (CDEP) were abolished.
2.
Up to 70% of welfare payments were quarantined. This limits the types of goods and services that the person receiving the payment can buy. In 2009, Prime Minister Rudd implemented this in the form of the BasicsCard.
3.
The permit system for access to Aboriginal Land was removed.
4.
Specific provisions within the Racial Discrimination Act (RDA) were suspended.
5.
Aboriginal Land was compulsorily acquired.
6.
Aboriginal children can be subjected to mandatory health checks without consulting their parents.

It was said to be about sexual abuse, but quickly, within a month, it came to focus on dysfunction in Aboriginal communities and then the real description of the intervention was laid out by John Howard in August 2007.

He said it was about mainstreaming or normalising remote-living Indigenous Australians and he told residents at Hermannsburg that, while respecting the special place Indigenous people in the history and life of this country, he said their future could only be as part of the mainstream of the Australian community. That was what it was about.

Without consultation Aboriginal peoples' lives became heavily regulated, and many felt ashamed and angry. The Intervention itself ignored recommendations in the original report that action should be ‘localised’ not ‘centralised’. Army troops were deployed in Indigenous communities in the Northern Territory and highly restrictive legislation was quickly passed by the government.

This action brought an end to the longstanding Commonwealth government approach of supporting Indigenous self-determination, valuing Indigenous cultural difference, and diversity of choice. It replaced it with a new paternalism, or guardianship, where 'government knows best' and Indigenous difference is understood as a negative or a deficit which must be reformed.

Aboriginal and/or Torres Strait Islander people should be aware that this website contains images, voices and names of people who have passed away.